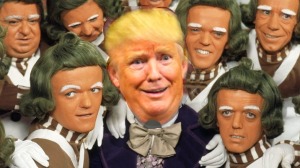 If you love the USA as much as I do, you will not vote for trump.  If you need a reason for your less-enlightened friends, here are the top 50 reasons a US patriot would not vote for Trump.

If you think any of these are unfair, do your own FACT finding research – each of these statements is based upon Trump quotes or public records (in the case of the lawsuits he has brought and defended).

I am a disenchanted Republican, fed up with elitist, boorish, backward-thinking, anti-education, divisive and unelectable candidates. I am blogging as a "new" Republican, true to the roots of the party, not beholden to billionaires.
View all posts by karengrossman →
This entry was posted in Uncategorized and tagged conservative, donald trump, election, politics, racism, republican, Trump, voters, women. Bookmark the permalink.